Lounging around with Off Beat 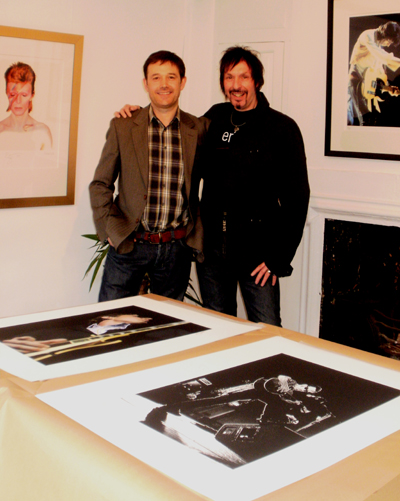 Mark Overton of Off Beat Lounge with Nick

A new exciting partnership with unique album art and licensing specialists, Off Beat Lounge, was cemented today with the delivery of four of Nick’s limited edition images.

Specialising in offering some of the world’s most iconic music related photography and rare signed album artwork, Off Beat invited Nick to be the final member of an exclusive group of four of the world’s leading rock photographers including Mick Rock, Dennis O’Regan and Michael Spencer Jones.

We’re delighted with the partnership, this is what owner, Mark Overton, had to say about it all:

“Having been a private collector of signed fine art rock photography & limited edition album cover prints for quite some time, I decided to launch Off Beat Lounge in 2010, and in doing so, morph my love of rock art into a business.

Now, having opened our first gallery and consultation service in Norwich, I’m delighted that Nick Elliott has made some of the very finest live shots ever taken available to Off Beat clients.

Nick’s ability to capture some of the greatest innovators and performers in rock music at close quarters is a marvel to behold, and without hesitation I’d now place Nick’s work above the vast majority of live photography available.

In person, Nick Elliott rocks as much as the imagery he captures. One is left in no doubt that his camera is every bit his Les Paul or Stratocaster.

Over the coming years Off Beat Lounge will be working closely with Nick Elliott, and offering not only opportunities to view and acquire his amazing work, but also, on a few rare occasions, the chance to ask him a few questions over a beer. More than ever, we’re worth knowing…..We’re Off Beat! “

3 Comments on “Lounging around with Off Beat”